Patterson 'a big player for us' - Clarke

Steve Clarke hailed Nathan Patterson as "a big player for us" after the right-back set up the winning goal against Moldova on his first Scotland start. The 19-year-old was preferred to Stephen O'Donnell after both missed Wednesday's World Cup qualifier loss to Denmark because of Covid-1... 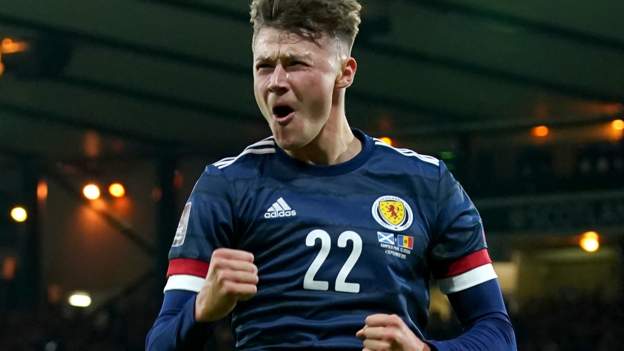 Steve Clarke hailed Nathan Patterson as "a big player for us" after the right-back set up the winning goal against Moldova on his first Scotland start.

The 19-year-old was preferred to Stephen O'Donnell after both missed Wednesday's World Cup qualifier loss to Denmark because of Covid-19 protocols.

"I wasn't surprised - I knew what he would give us," head coach Clarke said.

"When you watch him playing for Rangers, he's a good player. I think Nathan played a very good game."

Clarke said it was unfair on others to suggest that Patterson, who has yet to be become a regular starter with Scottish champions Rangers, brought something to the team at right-back that had been missing previously.

However, he said: "He gave us good energy going forward, almost got his first goal in his first start for his country, but fortunately Dykesy was in the right place to knock it over the line.

"He gives you good energy up and down the line, good quality, good passer of the ball. He tired a bit in the second half, but he showed good maturity to sit in his position. He can defend well and is good going forward.

Billy Gilmour missed a good chance to score his first Scotland goal in his fifth appearance, but the midfielder currently on loan to Norwich City from Chelsea was also praised by Clarke.

"Good player," the head coach added. "He tired a little bit in the second half, but it was important to get Billy on the ball. He dictates the tempo for us. He makes us pass, he makes us play.

"Two good young ones, but don't forget the senior ones as well. Grant Hanley at the back, good solid rock and I thought Jack Hendry was very good tonight."

When will Rangers win the Scottish Premiership?

Rangers player not seen in 2021 snapped in training but...

Rangers boss Steven Gerrard on how Alfredo Morelos has...